The compilation can be done in two parts : Analysis and synthesis, In analysis&nbsp;part the source program is read and broken down into constituent pieces, The syntax&nbsp;and the meaning of the source string is detenruned and then an intermediate code is&nbsp;created from the input source program. In synthesis put this internediate form of the source language is taken and converted into an equivalent target program. During this process if certain code has to be optimized for efficient execution then the required code is optimized. The analysis and synthesis model is as shown in Fig

The analysis part is carried out in three sub parts

1. Lexical Analysis- In this step the source program is read and then it is broken into stream of strings. Such strings are called tokens. Hence tokens are nothing but only collection of characters having some meaning.

2. Syntax Analysis -In this step the tokens are arranged in hierarchial structures that ultimately helps in finding the syntax  of the source string.

3. Semantic  Analysis - In this step the meaning of the source string is determined

In all these analysis steps the meaning of the every source string should be unique. Hence actions in lexical, syntax and semantic analysis are uniquely defined for a given language. After carrying out the synthesis phase the program gets executed.

To create an executable form of your source program only a compiler program is not sufficient.You may require several other programs to create an executable target program. After a synthesis phase a target code gets generated by the compiler. This target program generated by the compiler is processed further before it can be run which is as shown in the Fig. 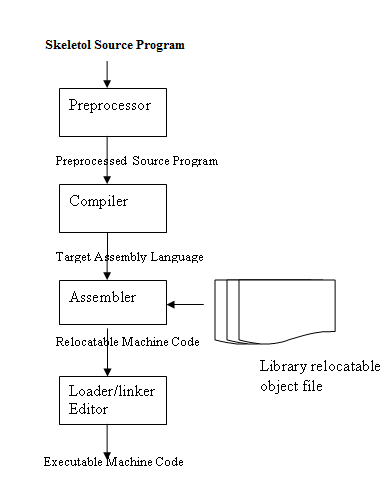 The compiler takes, a source program written in high level language as an input and converts it into a target assembly language. The assembler  then takes this assembly code as input and produces relocatable machine code as output. Then  program loader is called for perfoming the task of loading and link editing. The task of loader is to pedict the relocation of an object code. Relocation of an object code means allocation of load time addresses which exist in the memory and placement of Ioad time addresses and  and data in memory at proer location.. The link editor links the object module and prepares a single module from several files of relocatable object modules to resolve the mutual references. These files may be library files and these files may be referred by any program.